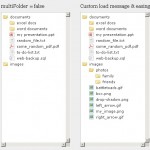 Being a Delphi programmer for many years (desktop applications for Win32), now I’m shifting to the web medium: AJAX, CSS. After some research, I’ve chosen the jQuery framework as the base for my future web applications. I was amazed by the number of plugins available for jQuery! I needed a plugin that was able to display the remote filesystem as an expandable/collapsible tree. I found jQuery File Tree to be exactly what I’ve needed.

But there was a problem: it didn’t have a Perl connector. So I’ve decided to write one:

For security reasons, I’ve added a root folder variable to the connector itself to prevent access to outside folders. The connector is using a single Perl module (HTML::Entities) for encoding filenames.